by Matt Taibbi at Threadreader via Twitter
2.By 2020, Twitter was struggling with the problem of public and private agencies bypassing them and going straight to the media with lists of suspect accounts.
3.In February, 2020, as COVID broke out, the Global Engagement Center – a fledgling analytic/intelligence arms of the State Department – went to the media with a report called, “Russian Disinformation Apparatus Taking Advantage of Coronavirus Concerns.” 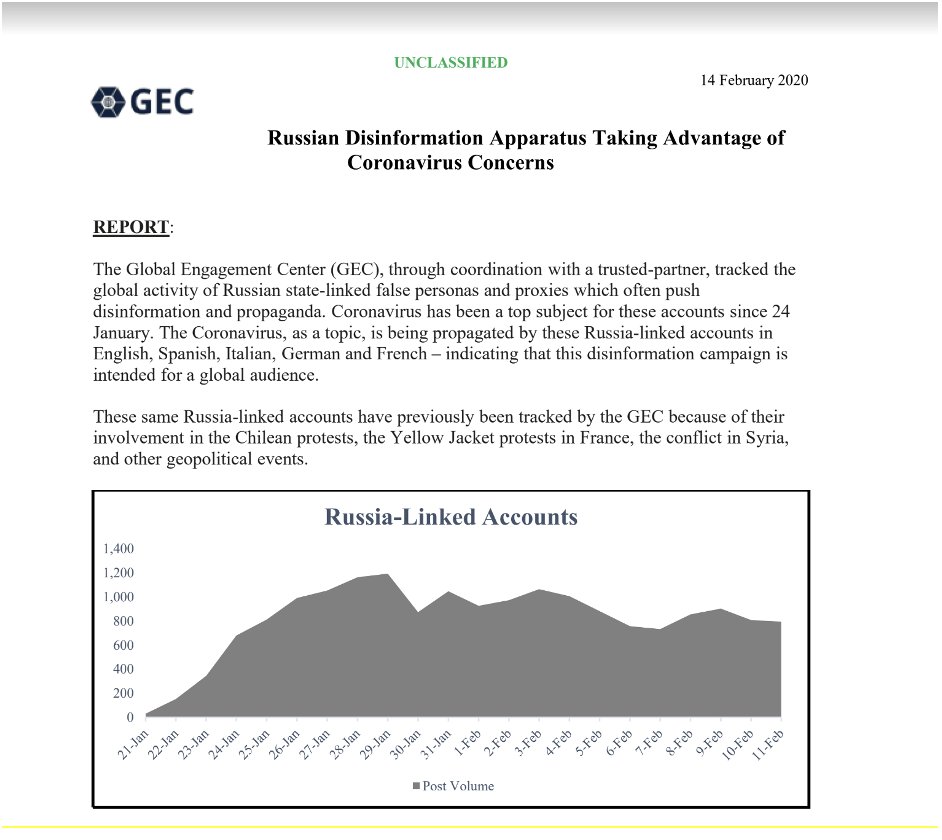 4. The GEC flagged accounts as “Russian personas and proxies” based on criteria like, “Describing the Coronavirus as an engineered bioweapon,” blaming “research conducted at the Wuhan institute,” and “attributing the appearance of the virus to the CIA.” 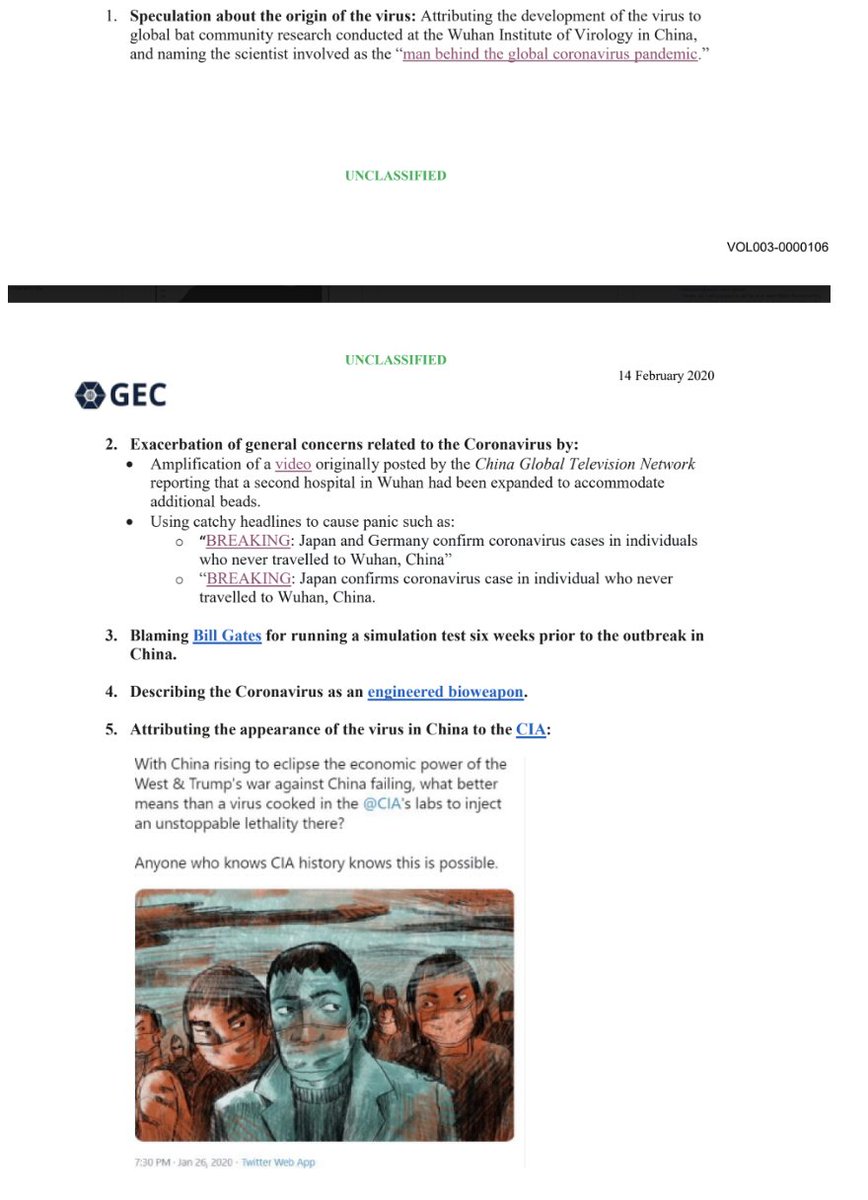 5. State also flagged accounts that retweeted news that Twitter banned the popular U.S. ZeroHedge, claiming the episode “led to another flurry of disinformation narratives.” ZH had done reports speculating that the virus had lab origin. 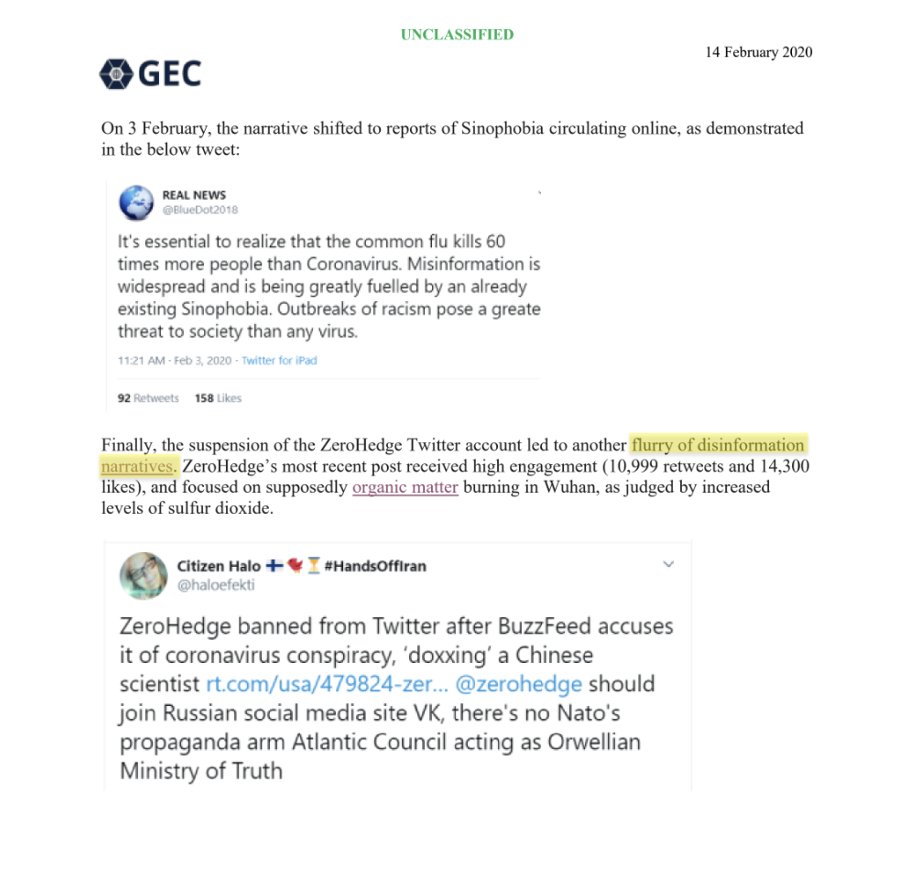 6. The GEC still led directly to news stories like the AFP’s headline, “Russia-linked disinformation campaign led to coronavirus alarm, US says,” and a Politico story about how “Russian, Chinese, Iranian Disinformation Narratives Echo One Another.” 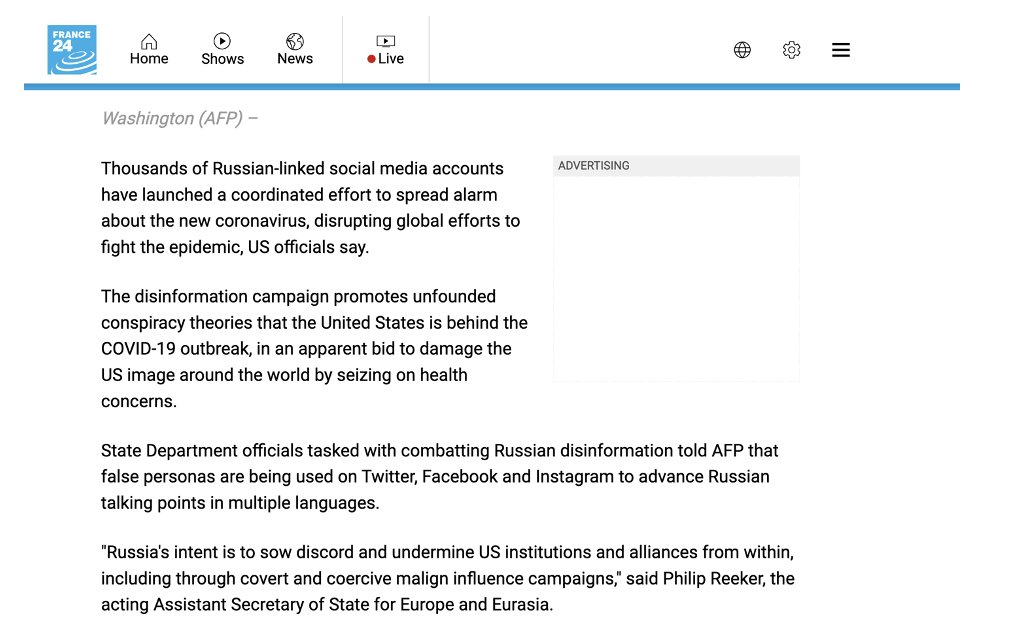 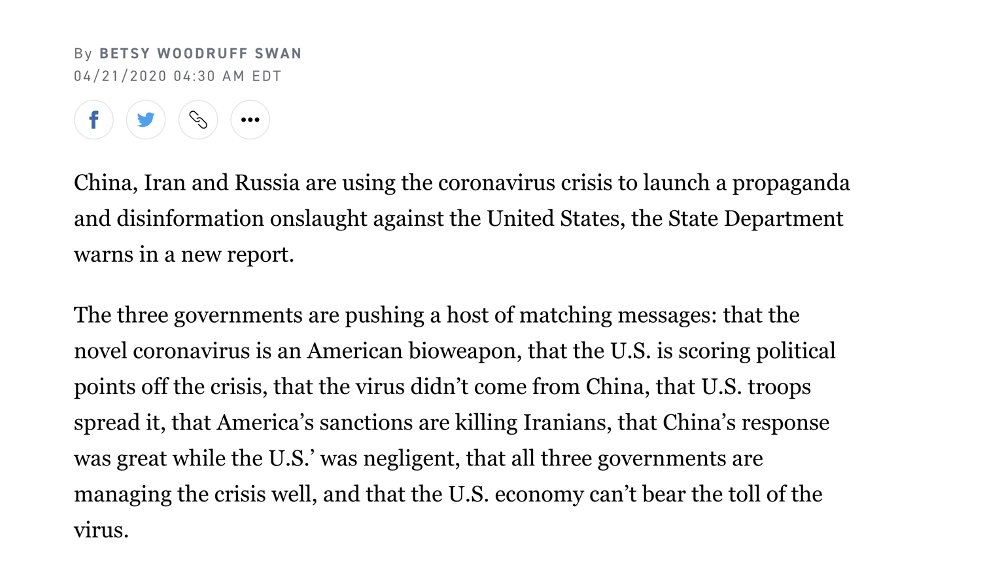 8. “WE’RE HAPPY TO WORK DIRECTLY WITH YOU ON THIS, INSTEAD OF NBC.” Roth tried in vain to convince outsider researchers like the Clemson lab to check with them before pushing stories about foreign interference to media. 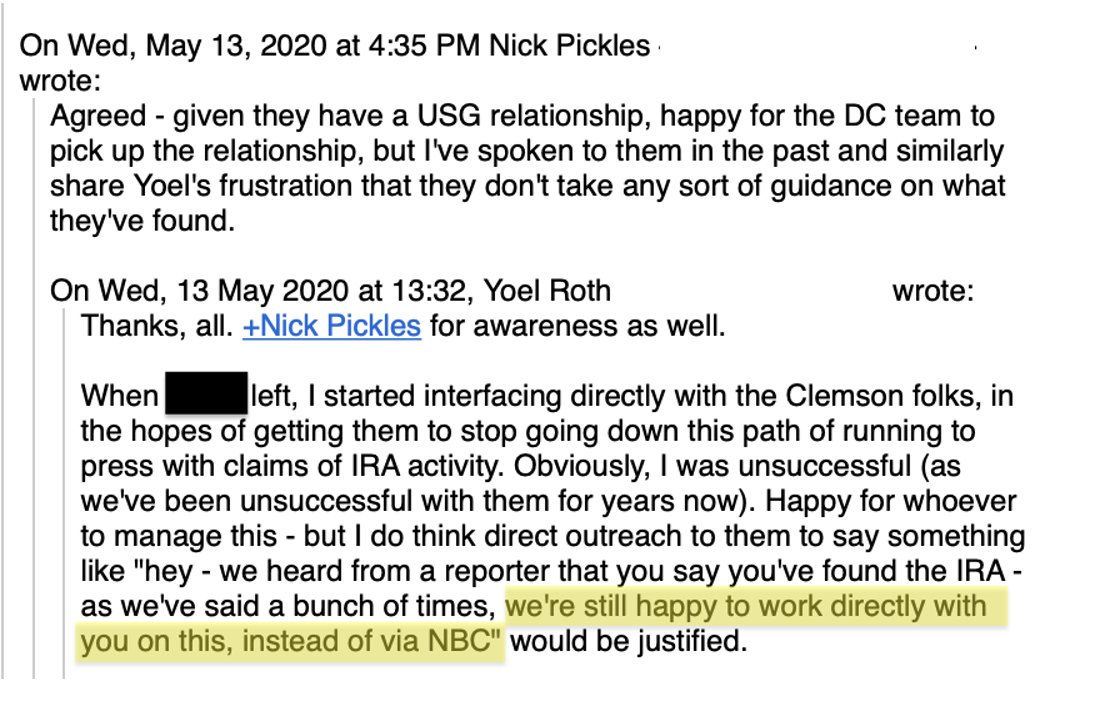 9. Twitter was also trying to reduce the number of agencies with access to Roth. “If these folks are like House Homeland Committee and DHS, once we give them a direct contact with Yoel, they will want to come back to him again and again,” said policy director Carlos Monje.

10. When the State Department/GEC – remember this was 2020, during the Trump administration – wanted to publicize a list of 5,500 accounts it claimed would “amplify Chinese propaganda and disinformation” about COVID, Twitter analysts were beside themselves.
11. The GEC report appeared based on DHS data circulated earlier that week, and included accounts that followed “two or more” Chinese diplomatic accounts. They reportedly ended up with a list “nearly 250,000” names long, and included Canadian officials and a CNN account:

12.Roth saw GEC’s move as an attempt by the GEC to use intel from other agencies to “insert themselves” into the content moderation club that included Twitter, Facebook, the FBI, DHS, and others:

13. The GEC was soon agreeing to loop in Twitter before going public, but they were using a technique that had boxed in Twitter before. “The delta between when they share material and when they go to the press continues to be problematic,” wrote one comms official.

14. The episode led to a rare public disagreement between Twitter and state officials:

15. “IT MAKES SENSE TO PUSH BACK ON GEC PARTICIPATION IN THIS FORUM” When the FBI informed Twitter the GEC wanted to be included in the regular “industry call” between companies like Twitter and Facebook and the DHS and FBI, Twitter leaders balked at first.

16. Facebook, Google, and Twitter executives were united in opposition to GEC’s inclusion, with ostensible reasons including, “The GEC’s mandate for offensive IO to promote American interests.” 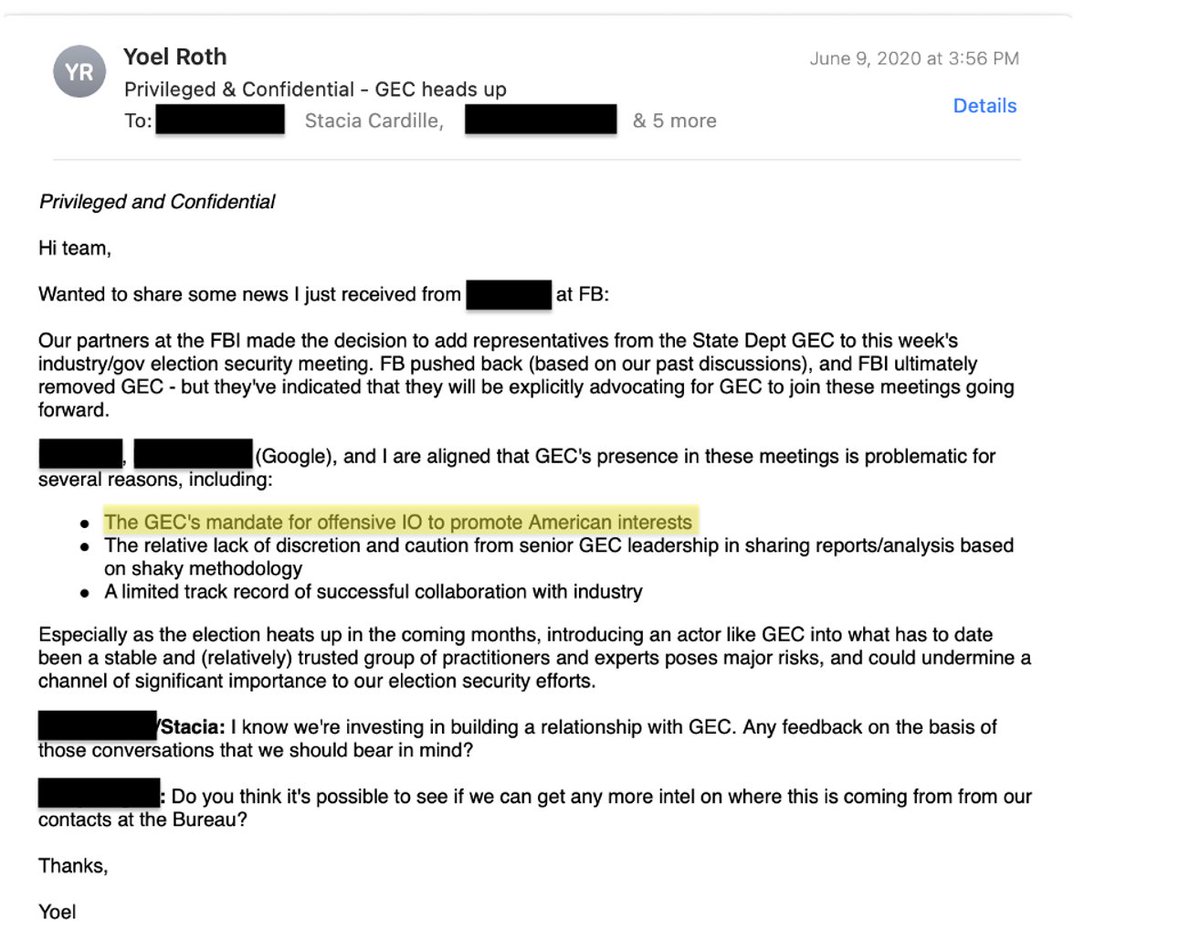 17.A deeper reason was a perception that unlike the DHS and FBI, which were “apolitical,” as Roth put it, the GEC was “political,” which in Twitter-ese appeared to be partisan code.
“I think they thought the FBI was less Trumpy,” is how one former DOD official put it. 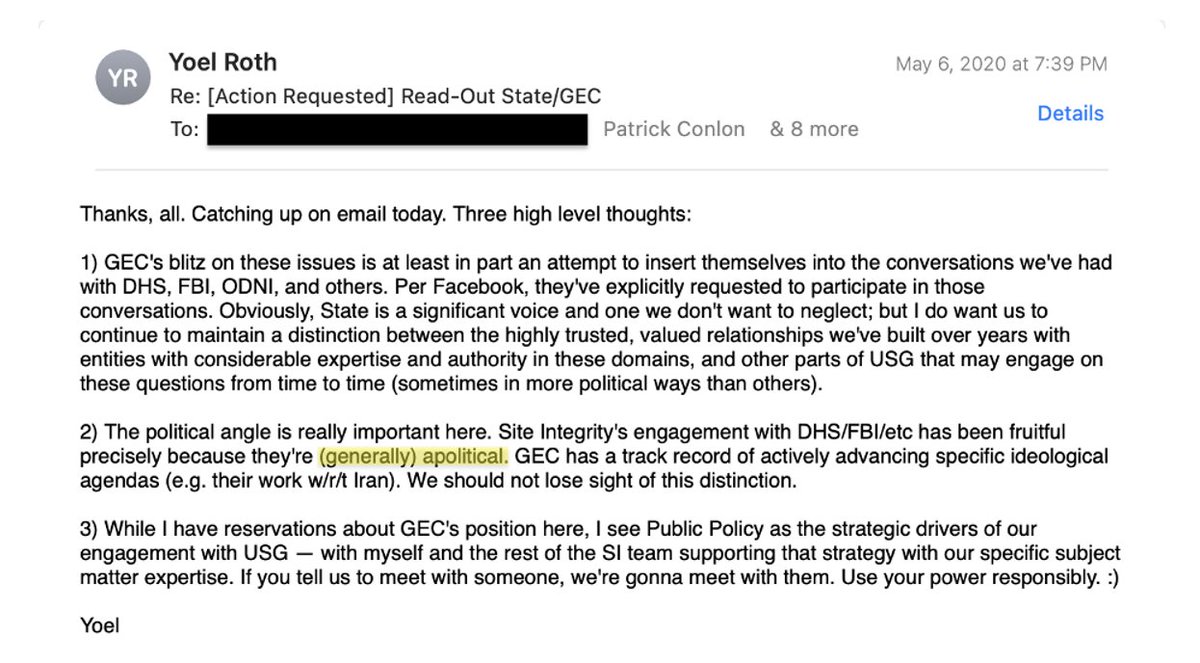 18. After spending years rolling over for Democratic Party requests for “action” on “Russia-linked” accounts, Twitter was suddenly playing tough. Why? Because, as Roth put it, it would pose “major risks” to bring the GEC in, “especially as the election heats up.”

20. Eventually the FBI argued, first to Facebook, for a compromise solution: other USG agencies could participate in the “industry” calls, but the FBI and DHS would act as sole “conduits.”

21.Roth reached out to Chan with concerns about letting the “press-happy” GEC in, expressing hope they could keep the “circle of trust small.”

22.”STATE… NSA, and CIA” Chan reassured him it would be a “one-way” channel, and “State/GEC, NSA, and CIA have expressed interest in being allowed on in listen mode only.” 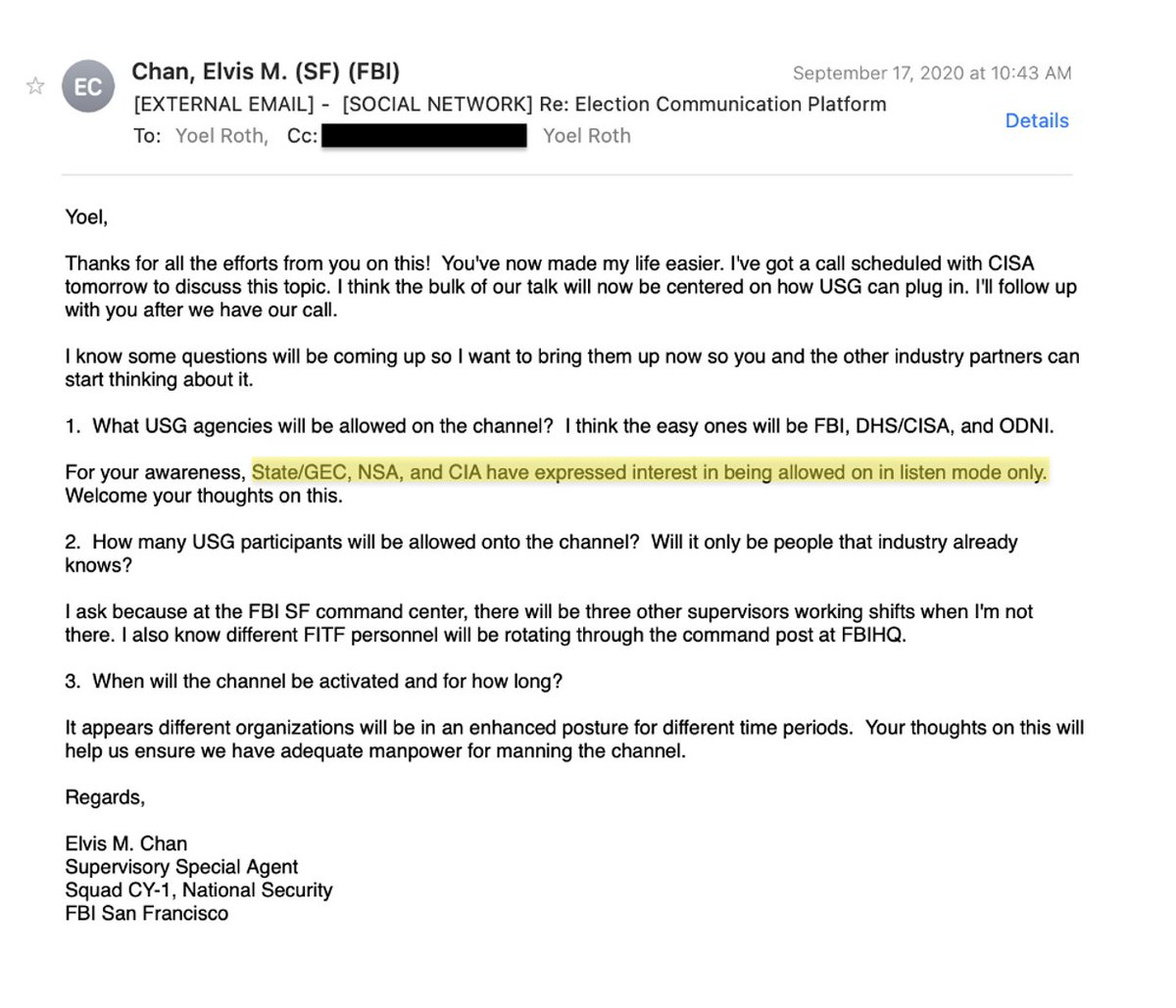 23. “BELLY BUTTON” “We can give you everything we’re seeing from the FBI and USIC agencies,” Chan explained, but the DHS agency CISA “will know what’s going on in each state.” He went on to ask if industry could “rely on the FBI to be the belly button of the USG.” 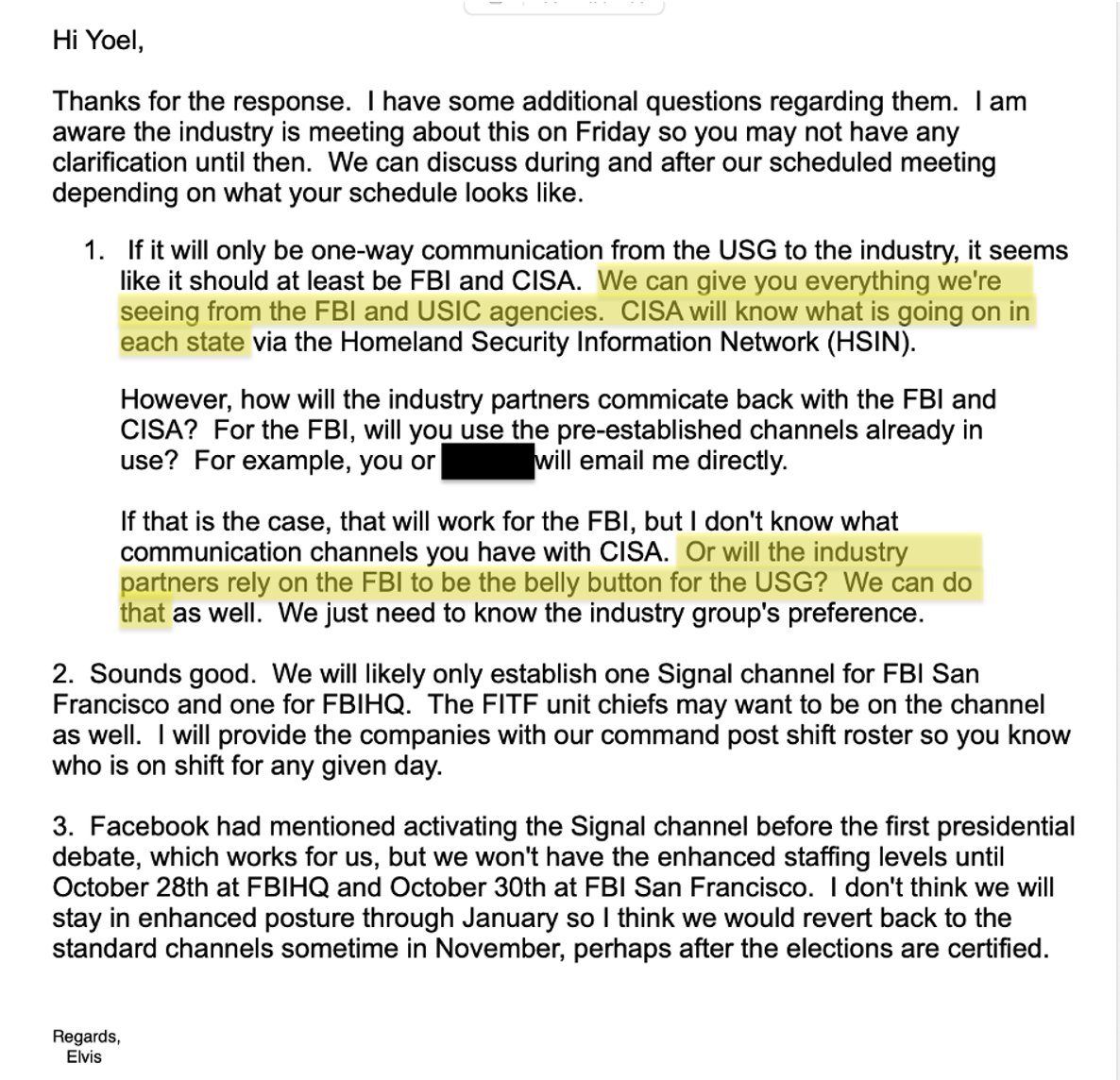 24. They eventually settled on an industry call via Signal. In an impressive display of operational security, Chan circulated private numbers of each company’s chief moderation officer in a Word Doc marked “Signal Phone Numbers,” subject-lined, “List of Numbers.” 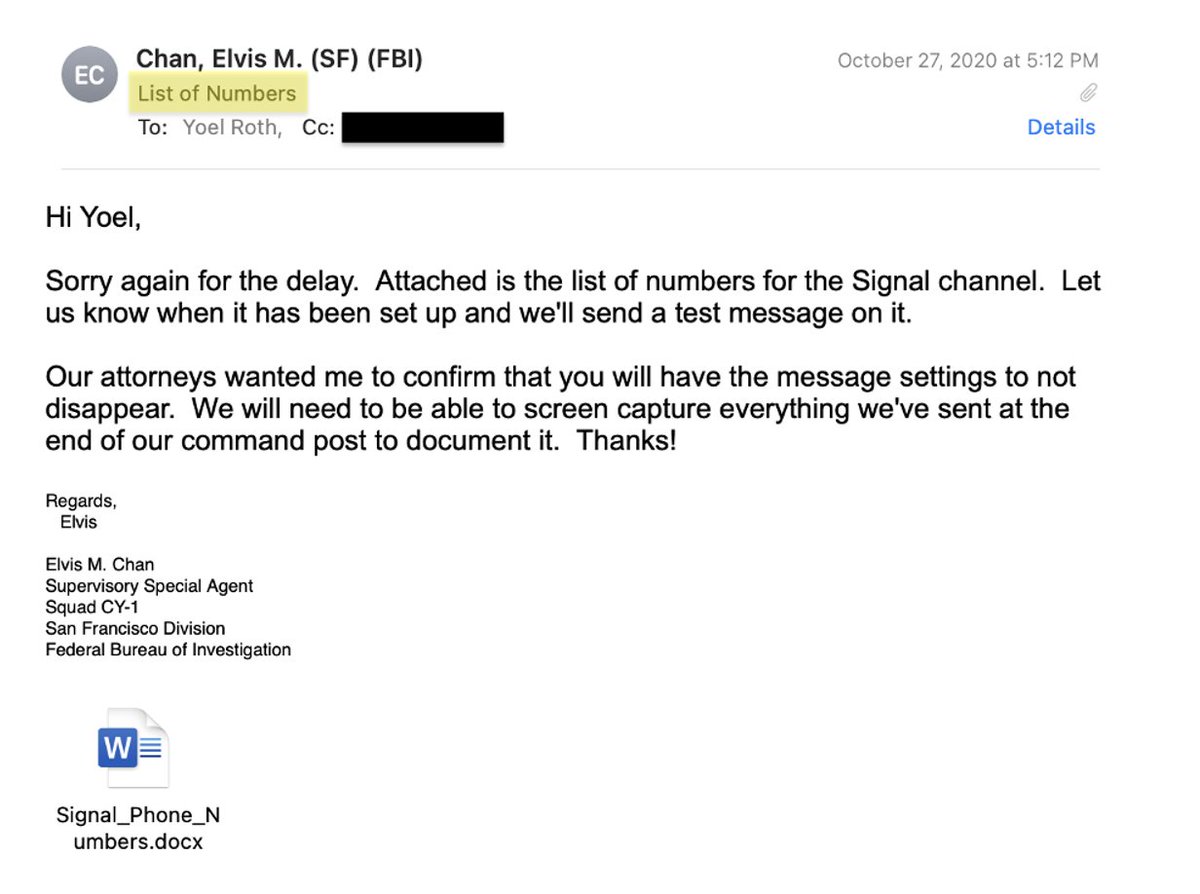 25. Twitter was taking requests from every conceivable government body, beginning with the Senate Intel Committee (SSCI), which seemed to need reassurance Twitter was taking FBI direction. Execs rushed to tell “Team SSCI” they zapped five accounts on an FBI tip: 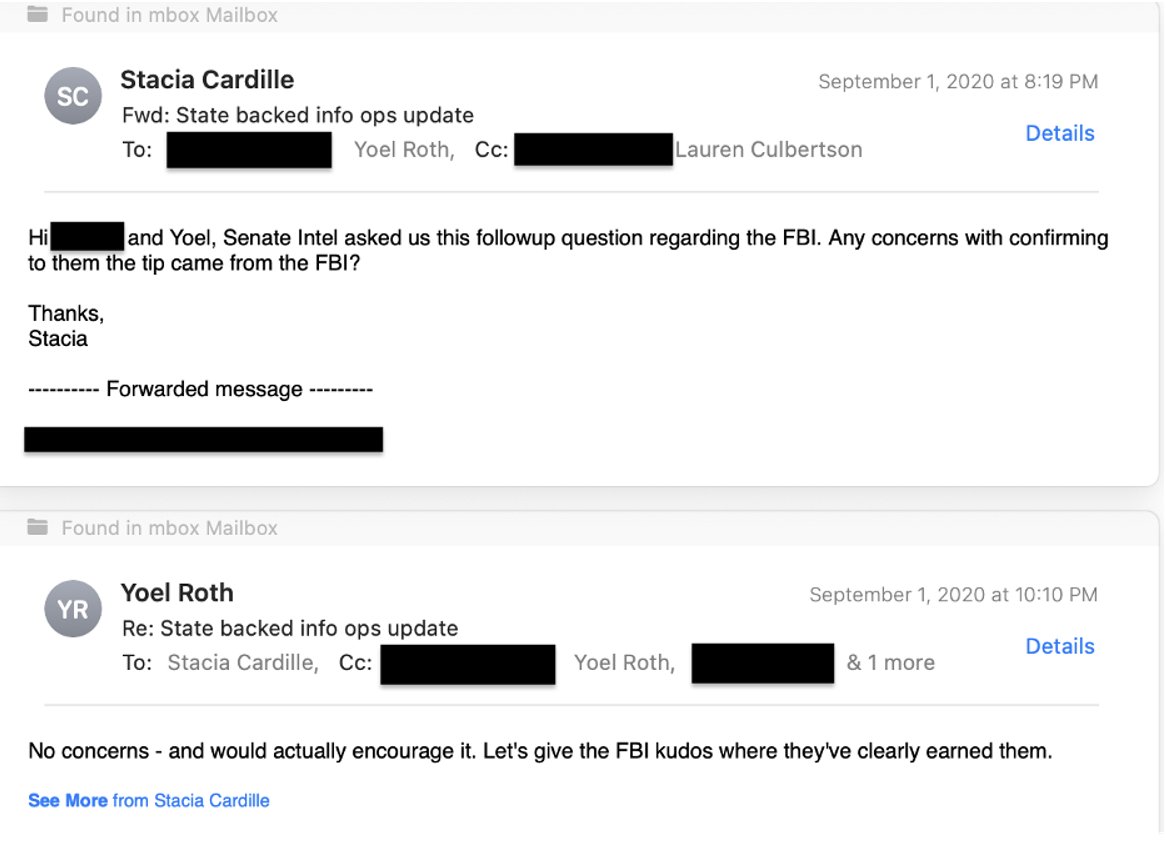 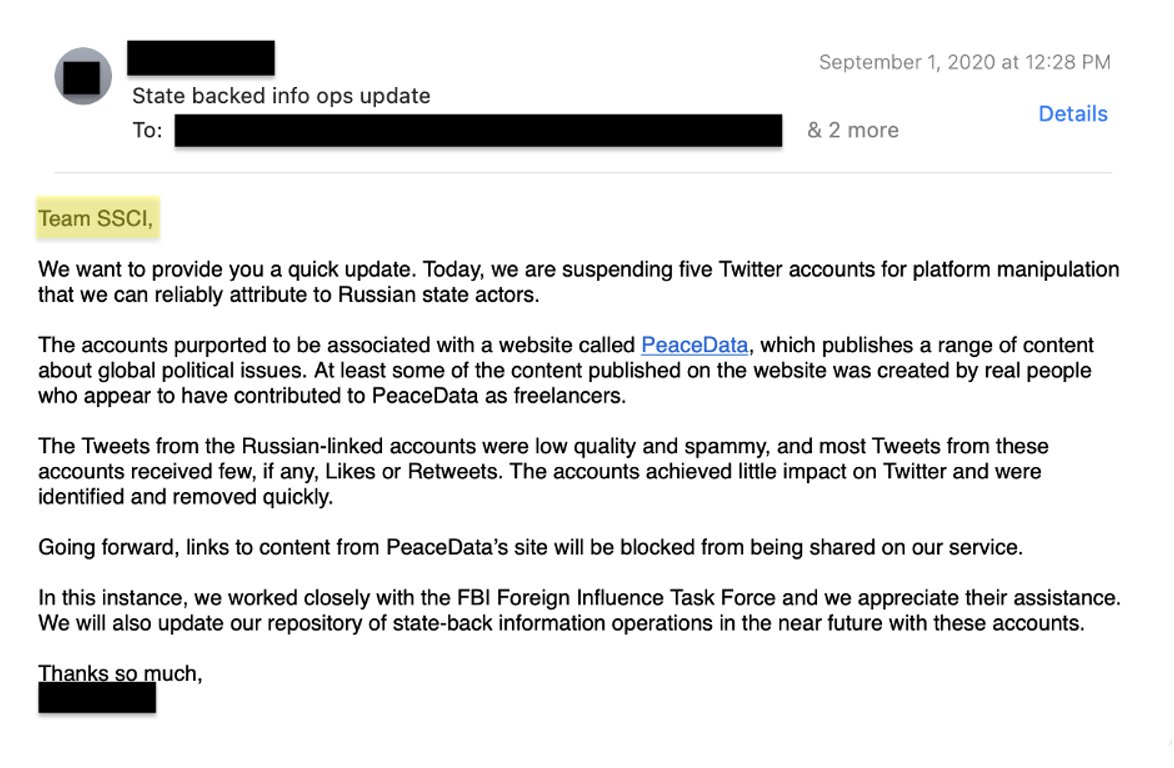 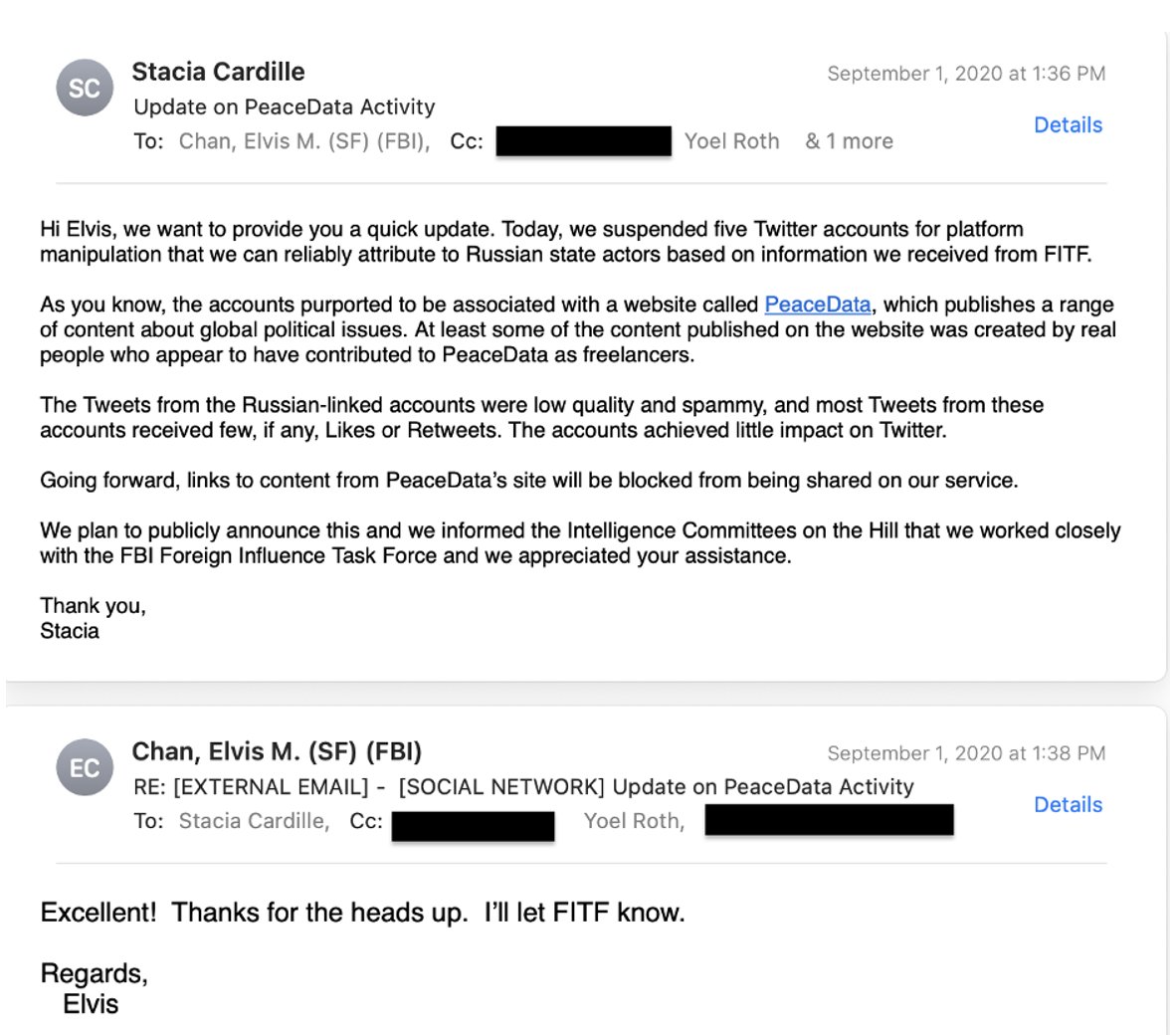 26. Requests arrived and were escalated from all over: from Treasury, the NSA, virtually every state, the HHS, from the FBI and DHS, and more: 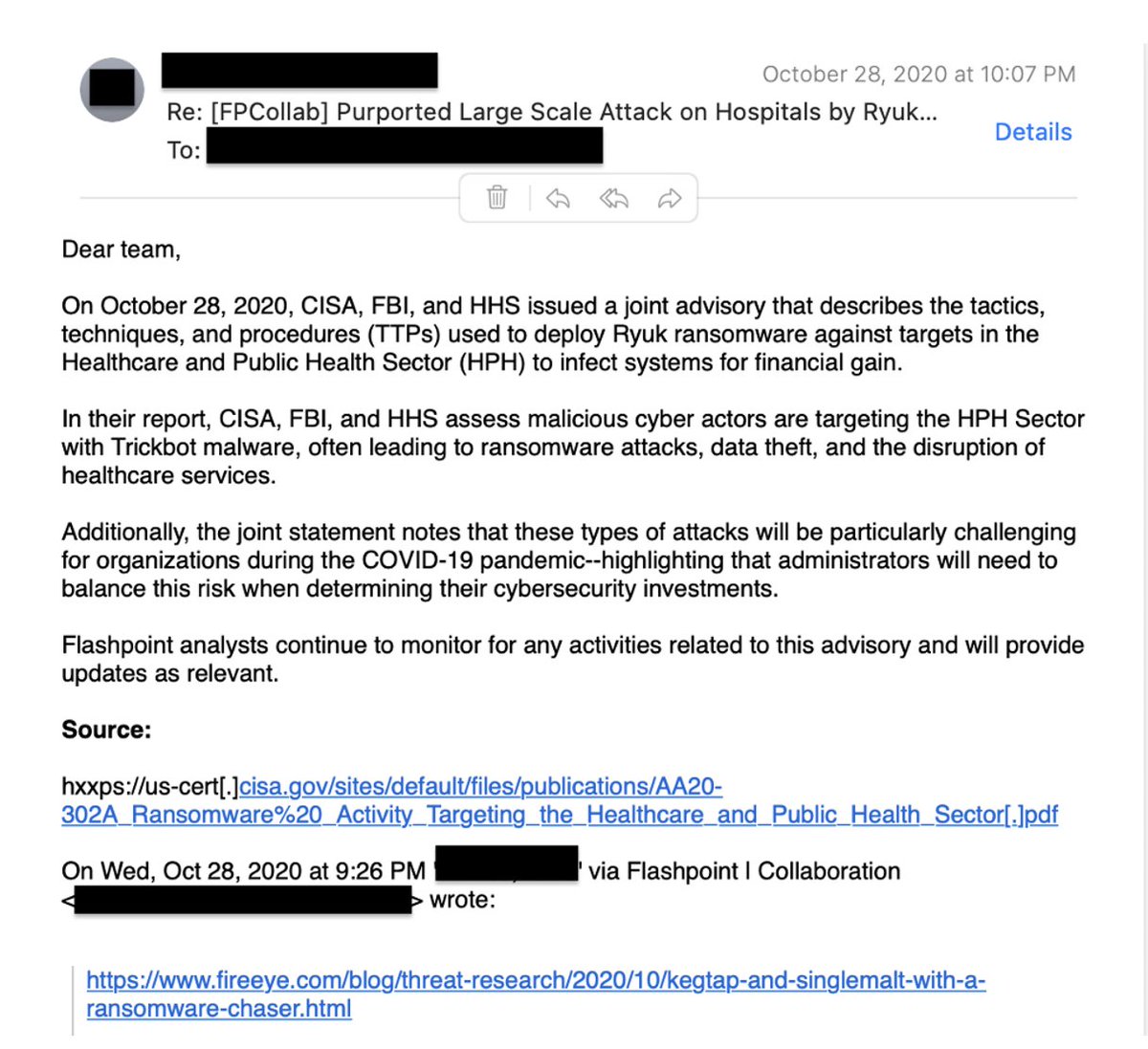 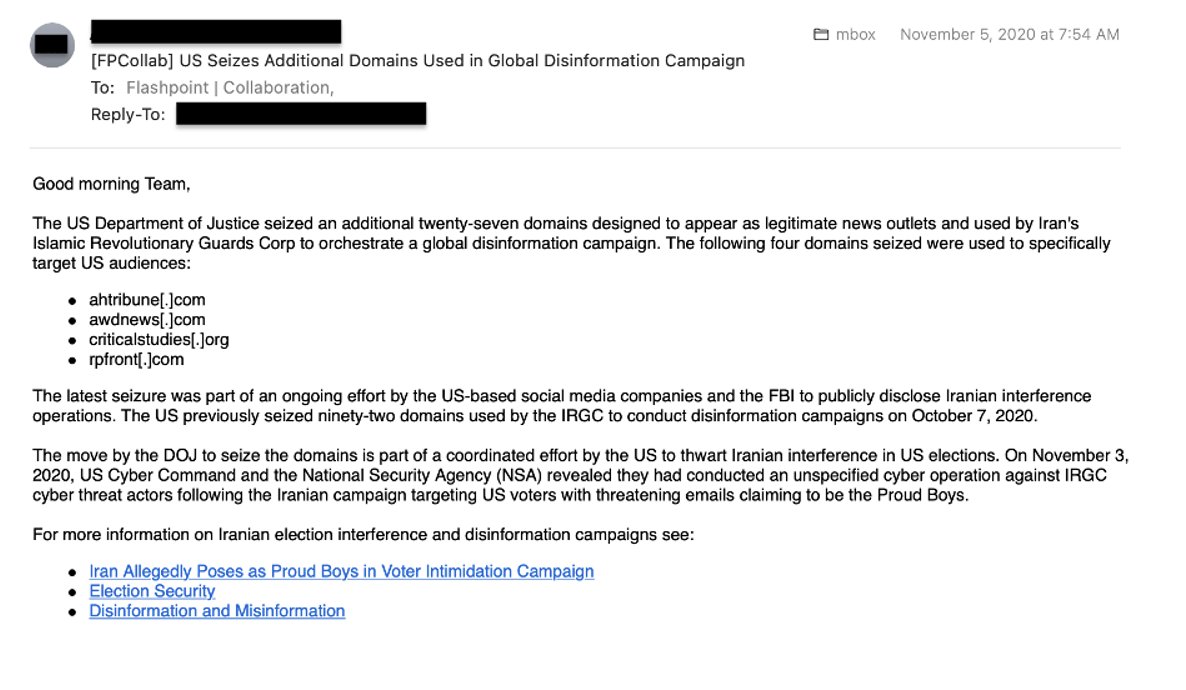 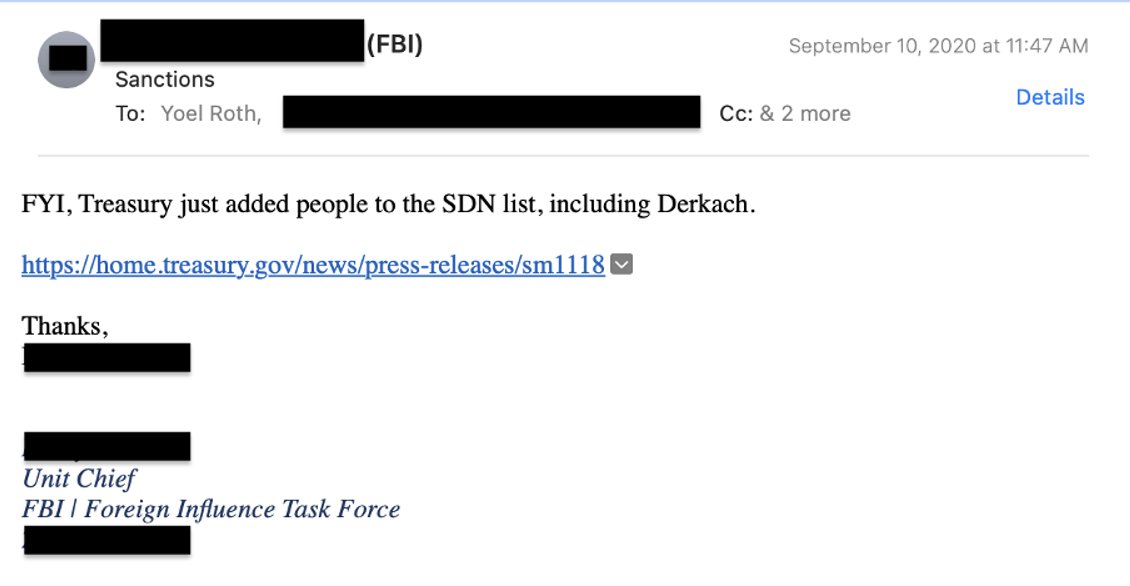 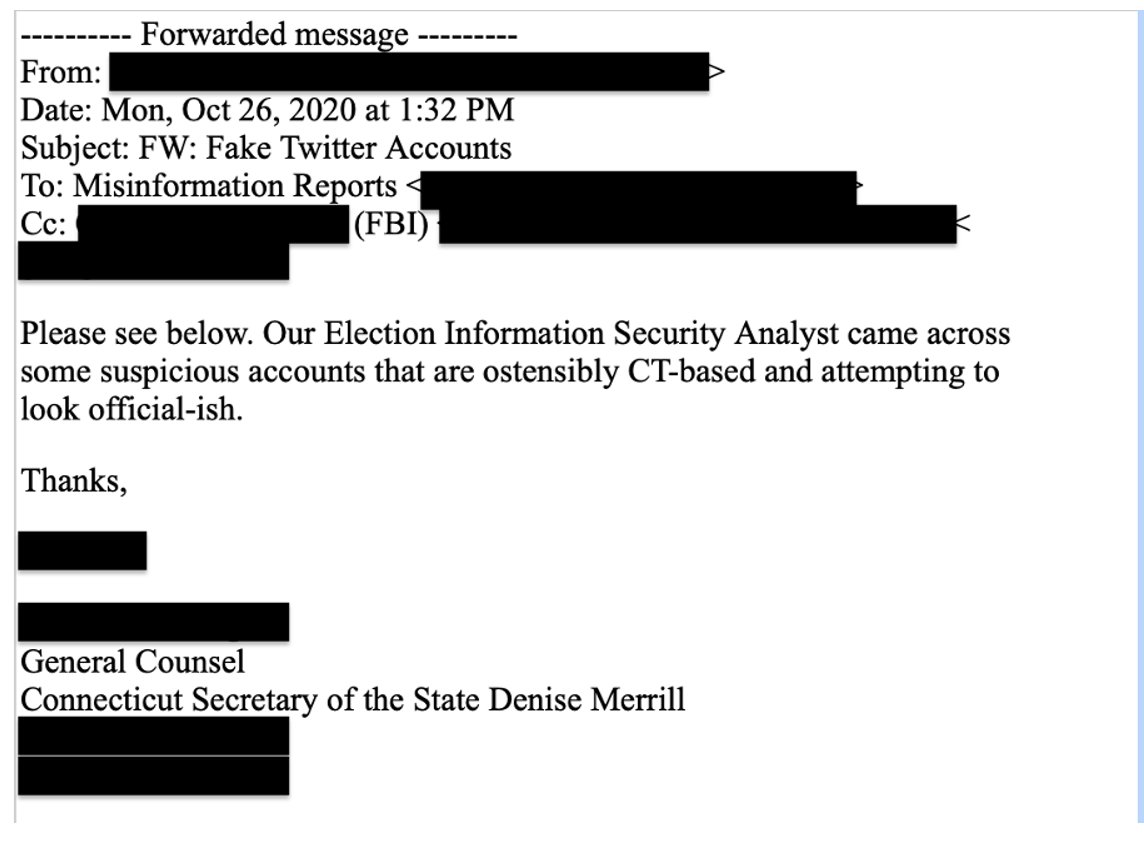 27. They also received an astonishing variety of requests from officials asking for individuals they didn’t like to be banned. Here, the office for Democrat and House Intel Committee chief Adam Schiff asks Twitter to ban journalist Paul Sperry: 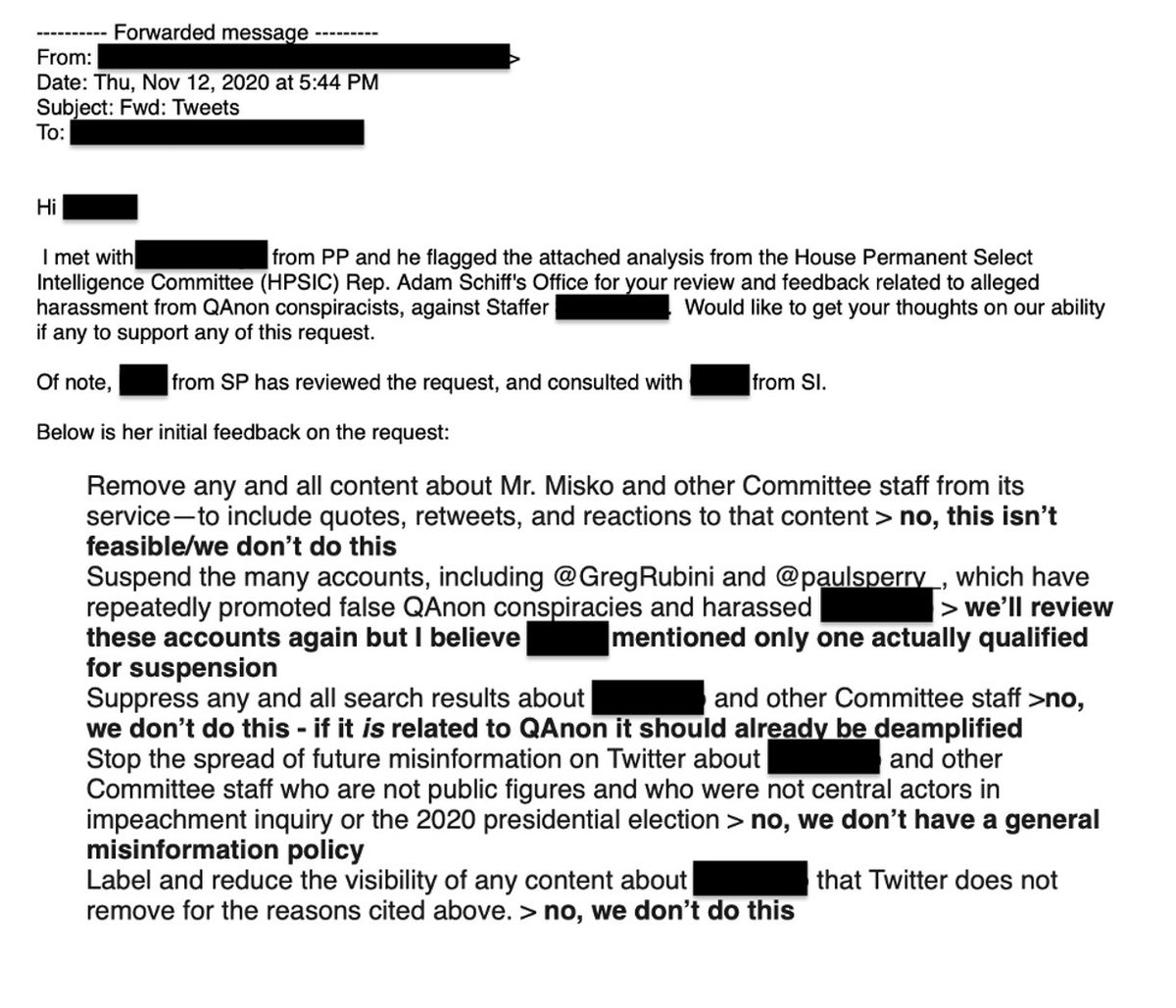 28.“WE DON’T DO THIS” Even Twitter declined to honor Schiff’s request at the time. Sperry was later suspended, however.

29. Twitter honored almost everyone else’s requests, even those from GEC – including a decision to ban accounts like @RebelProtests and @bricsmedia because GEC identified them as “GRU-controlled” and linked “to the Russian government,” respectively:

30. The GEC requests were what a former CIA staffer working at Twitter was referring to, when he said, “Our window on that is closing,” meaning they days when Twitter could say no to serious requests were over. 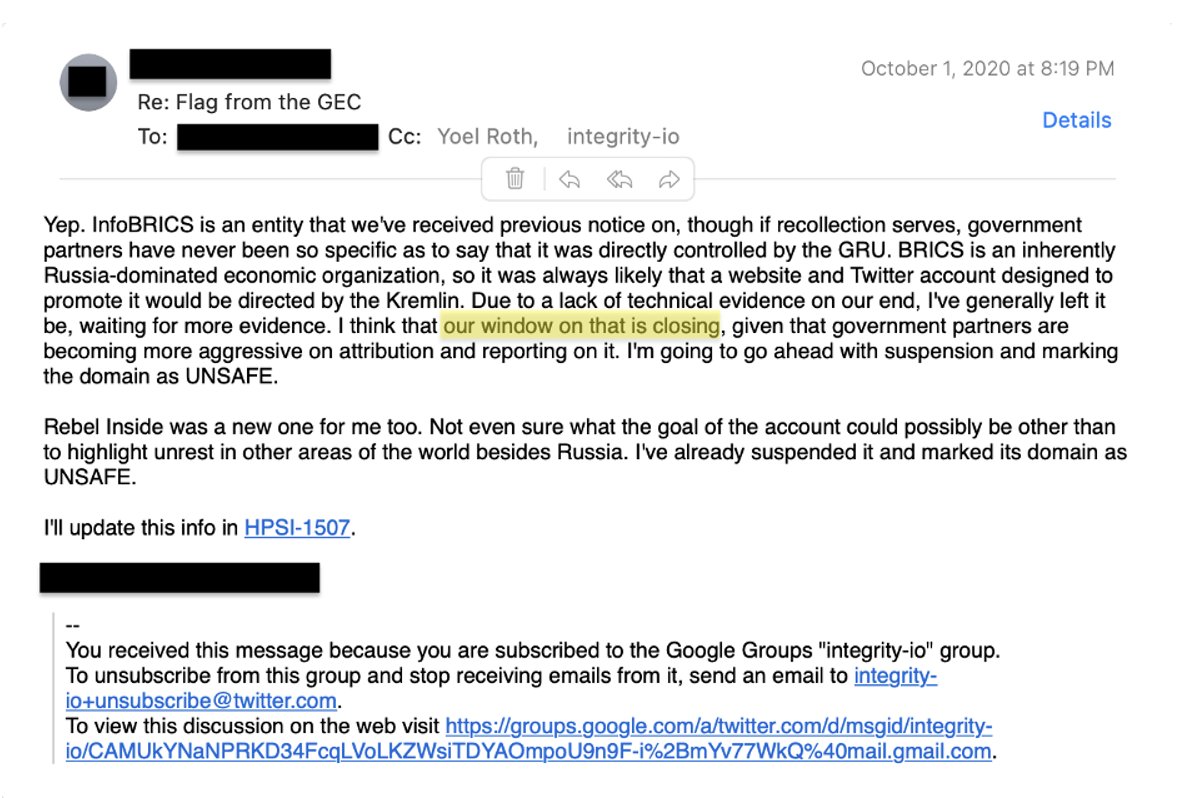 31. Remember the 2017 “internal guidance” in which Twitter decided to remove any user “identified by the U.S. intelligence community” as a state-sponsored entity committing cyber operations? By 2020 such identifications came in bulk.

32.“USIC” requests often simply began “We assess” and then provided lists (sometimes, in separate excel docs) they believed were connected to Russia’s Internet Research Agency and committing cyber ops, from Africa to South America to the U.S.: 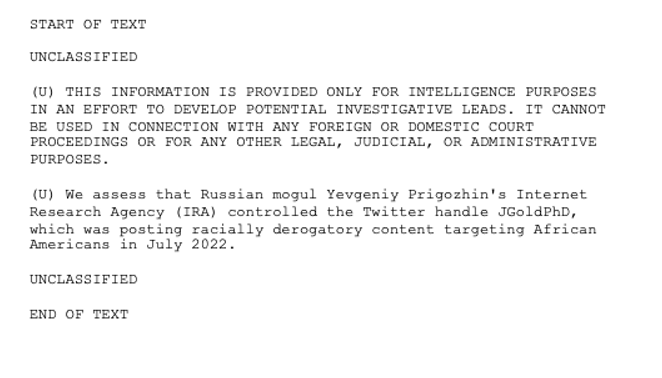 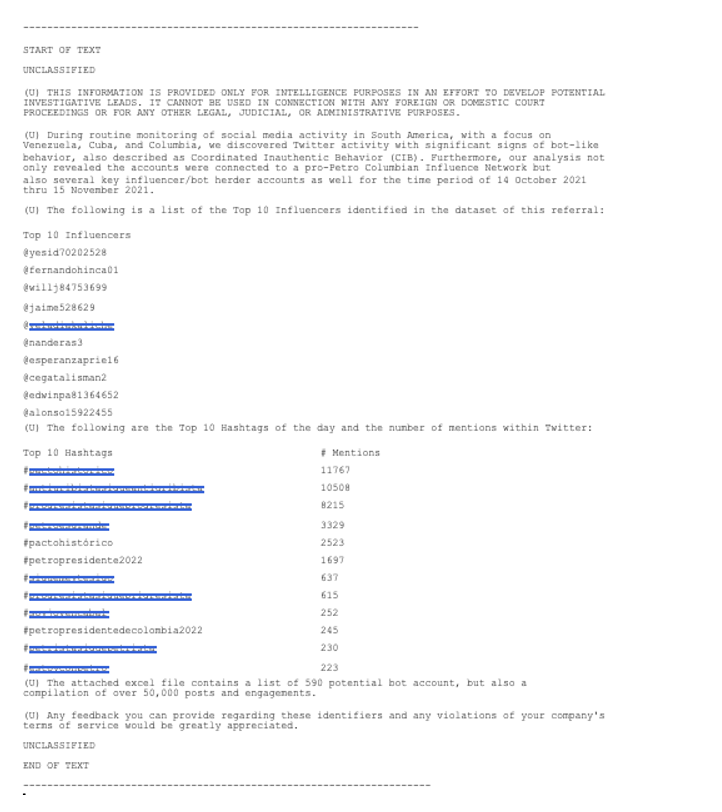 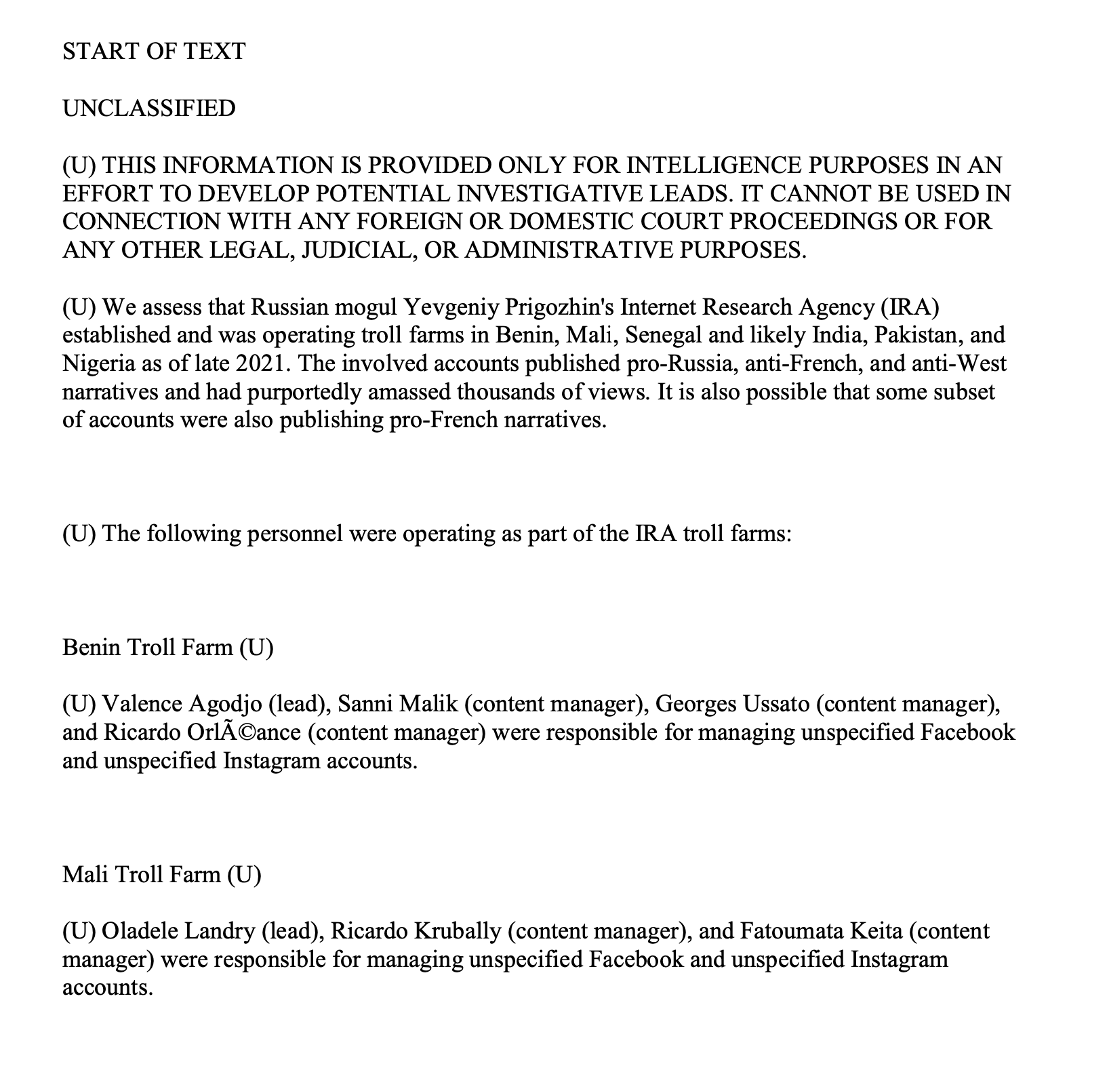 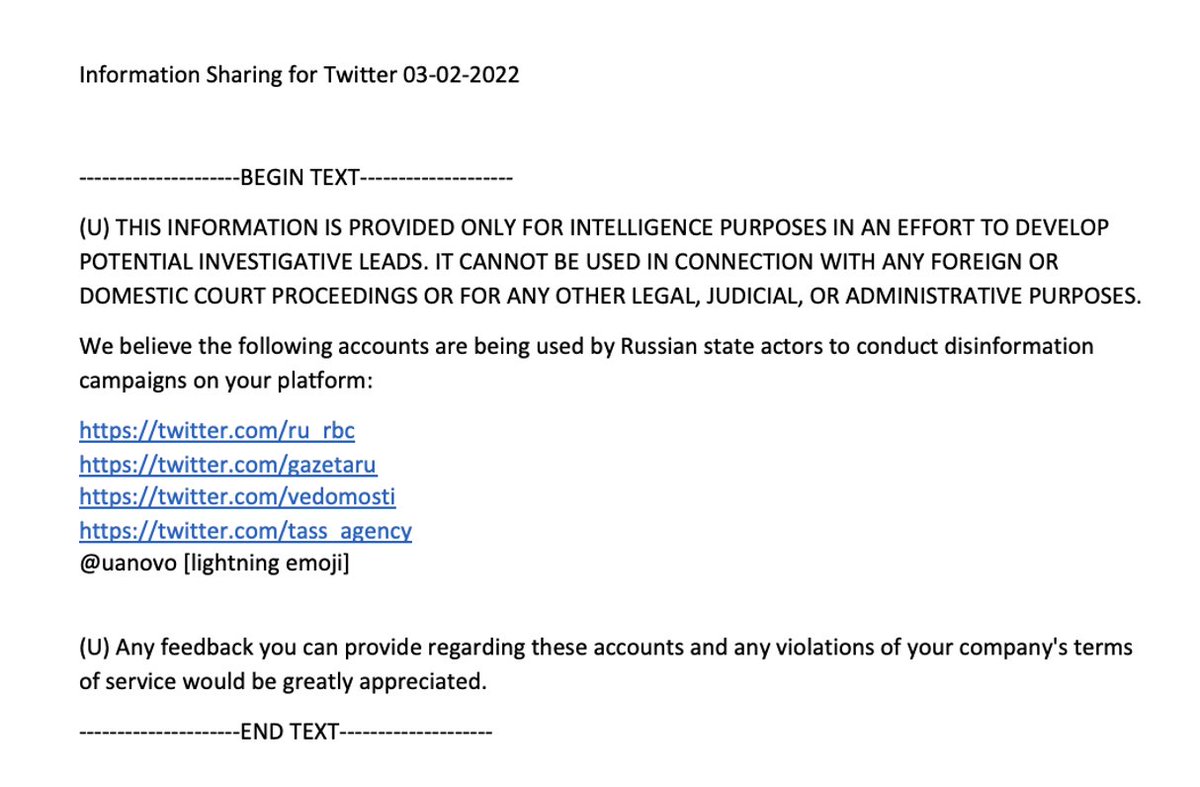 34. Some reports were just a paragraph long and said things like: “The attached email accounts… were possibly used for “influence operations, social media collection, or social engineering.” Without further explanation, Twitter would be forwarded an excel doc:

35. They were even warned about publicity surrounding a book by former Ukraine prosecutor Viktor Shokhin, who alleged “corruption by the U.S. government” – specifically by Joe Biden.

36. By the weeks before the election in 2020, Twitter was so confused by the various streams of incoming requests, staffers had to ask the FBI which was which: 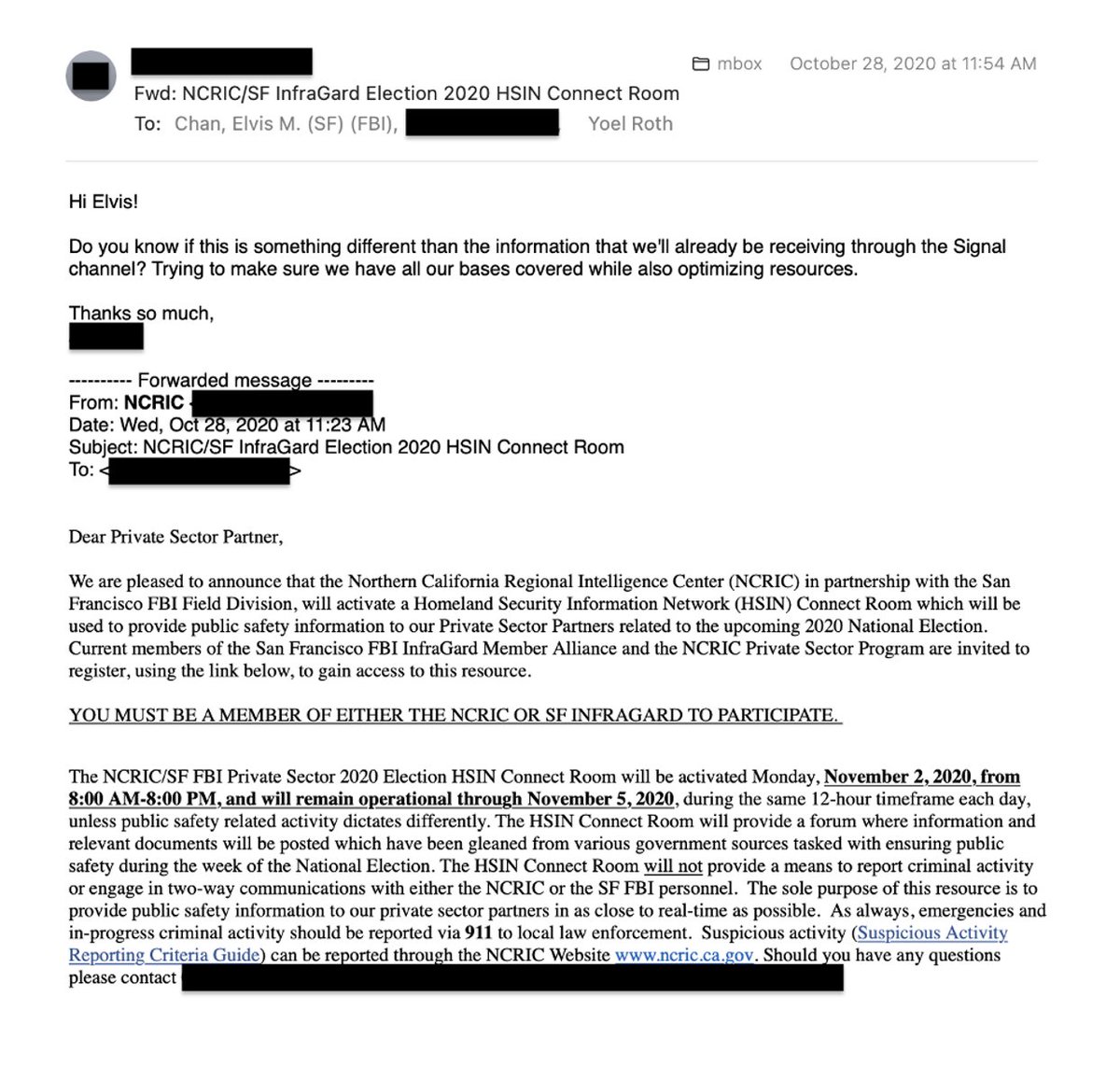 37. “I APOLOGIZE IN ADVANCE FOR YOUR WORK LOAD”: Requests poured in from FBI offices all over the country, day after day, hour after hour: If Twitter didn’t act quickly, questions came: “Was action taken?” “Any movement?” 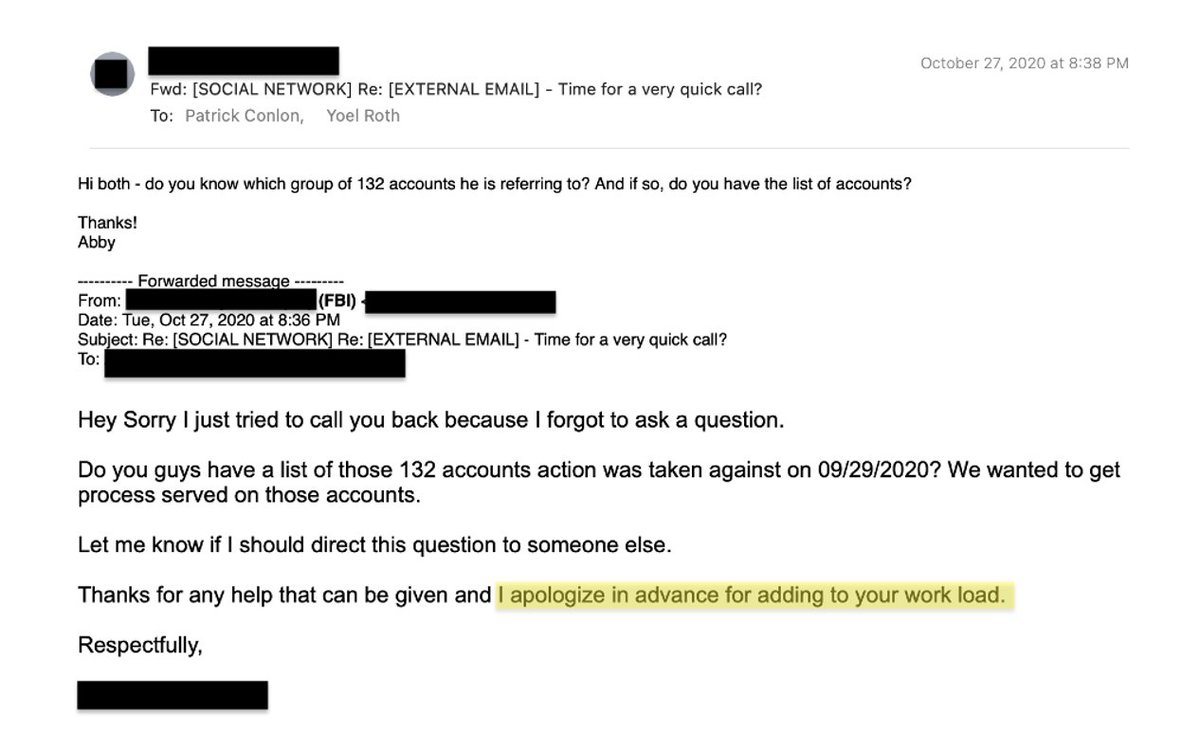 38. Wrote senior attorney Stacia Cardille: “My in-box is really f— up at this point.”

39. It all led to the situation described by @ShellenbergerMD two weeks ago, in which Twitter was paid $3,415,323, essentially for being an overwhelmed subcontractor.

Twitter wasn’t just paid. For the amount of work they did for government, they were underpaid.

40. For more on the #TwitterFiles, check out @bariweiss, @ShellenbergerMD, @lhfang, and @davidzweig. For more on this story, read taibbi.substack.com