At this point in history, anyone who is claiming the U.S. Government is not directly coordinating with social media platforms to shape opinion and cull information adverse to their interests, is being intellectually dishonest.   There is simply too much evidence of the intelligence apparatus, specifically the Dept of Homeland Security, being enmeshed with the platforms of Twitter, Facebook, Instagram, Google and Microsoft.

The DHS justifications for the relationship all involve claims of ‘national security’ and domestic terror threats.  However, the simple and transparent motivations of the relationship are all political.  The DHS terms of “disinformation, misinformation and malinformation” are simply excuses for the platforms to adhere to the demands of the government and censor or remove discussion that is against the interests of those in power.  The truth of this is in the sunlight now.

That said, the relationship between the intelligence community and social media is one of mutual benefit.  DHS gets to conduct surveillance and control permitted speech in the public square, and in return Big Tech gets assurances of their ability to continue monopolistic enterprise and simultaneously receive subsidies on operational costs.  The legislative branch allows this synergy without oversight because the legislative branch is in alignment with the larger ‘national security’ ruse.

Into this mix it is worth revisiting congressional testimony from former Twitter founder and CEO Jack Dorsey on March 25, 2021.  The hearing was on “disinformation” [Transcript Link]: 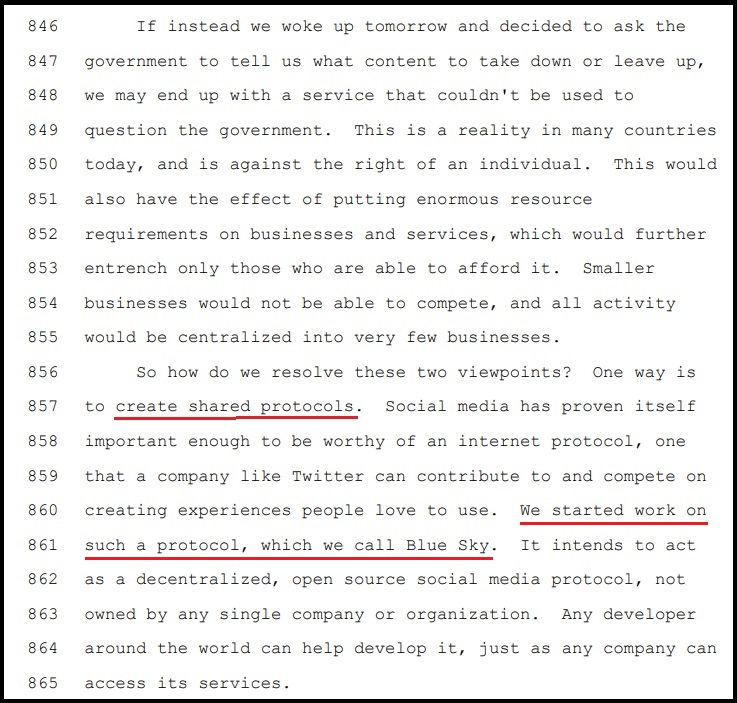 A shared hashing protocol is a form of data system integration.   Look at what Dorsey was saying about “Blue Sky” his latest big tech initiative, on March 25,2021.

July 26, 2021, (Reuters) – A counterterrorism organization formed by some of the biggest U.S. tech companies including Facebook (FB.O) and Microsoft (MSFT.O) is significantly expanding the types of extremist content shared between firms in a key database, aiming to crack down on material from white supremacists and far-right militias, the group told Reuters.

Until now, the Global Internet Forum to Counter Terrorism’s (GIFCT) database has focused on videos and images from terrorist groups on a United Nations list and so has largely consisted of content from Islamist extremist organizations such as Islamic State, al Qaeda and the Taliban.

Over the next few months, the group will add attacker manifestos – often shared by sympathizers after white supremacist violence – and other publications and links flagged by U.N. initiative Tech Against Terrorism. It will use lists from intelligence-sharing group Five Eyes, adding URLs and PDFs from more groups, including the Proud Boys, the Three Percenters and neo-Nazis.

The firms, which include Twitter (TWTR.N) and Alphabet Inc’s (GOOGL.O) YouTube, share “hashes,” unique numerical representations of original pieces of content that have been removed from their services. Other platforms use these to identify the same content on their own sites in order to review or remove it. (more)

A shared hashing protocol is a form of data system integration.

When The Intercept is talking about portals between DHS and social media, the “shared protocols” is the technical name for the data integration between the U.S. government and Social Media.

Now…. again, keep in mind what Dorsey is saying about his Blue Sky network app for a new inclusive social media platform.  A network that would be established with these “shared protocols.”    Look carefully at what is written in the Intercept Article about the Intelligence Community engagement:…