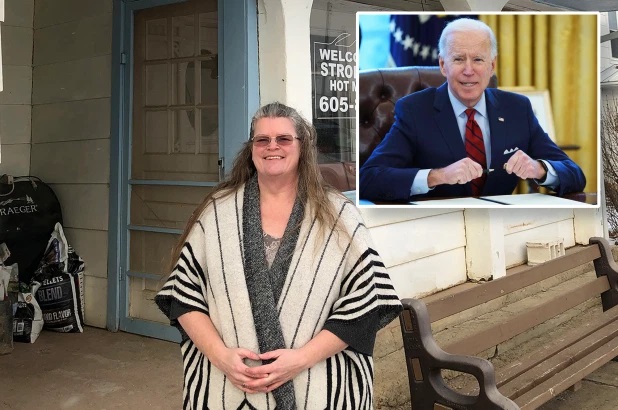 On the morning of Jan. 20, every room of the two-story Stroppel Hotel in Midland, SD, was filled with men and women who work on the Keystone XL pipeline. Most of these union laborers, welders and pipefitters started their day over a cup of coffee in the hotel’s common room before heading out to their jobs.

By 4 p.m., the entire place was cleared out, leaving the historic hotel silent for the first time since owners Laurie and Wally Cox took it over six months ago.

“Our whole world turned upside down with the stroke of a pen,” Laurie said.

She is speaking of President Biden’s executive order, signed on his first day in office, that halted work on the Keystone XL pipeline in South Dakota and immediately eliminated 1,000 union jobs. TC Energy, the company that was developing the project, predicts that more than 10,000 jobs will be lost in 2021 due to the order.

Now Laurie, who holds a master’s degree in social work, sits alone in the vacant hotel while her husband Wally finds work as a millwright hours away. She starts to cry as she recalls how they bought the building in late September and quickly turned it into an affordable and social place for pipeline workers to stay.

“We structured our prices to suit the per diems of each trade,” she said. “We created a common room because there is a real sense of community within these workers, and we thrived since the day we opened our doors.”

Since Jan. 20, “the entire town became an instant ghost down.”

The XL pipeline wasn’t the only project stopped by Biden’s pen. On Wednesday, he issued an executive order halting oil and gas leasing and drilling permits on federal lands and waters.

That order hit hardest in New Mexico, where the oil- and gas-rich Permian Basin lies largely on federal land.

“As a direct result of the executive order, I was just contacted by a Canadian company to inform me that the plant they were going to construct and operate in south Eddy County will instead go to Reeves County in Texas where their operation will not be surrounded by federal land,” said John Waters, executive director of the Carlsbad Department of Development.

In New Mexico alone, potentially 62,000 jobs and $1 billion in revenue will be lost in the first year after Biden signed his mandate, according to a recent economic impact study by the American Petroleum Institute.

“It will also cost a lot of jobs in the industry, the small businesses that support them and take a major bite out of our economic development,” Waters said.

New Mexico’s oil, gas and mining industries fund 40 percent of the state’s tax revenue. In 2019, that totaled $3.1 billion, with $1.36 billion of that flowing to public schools. As a result of the order, education and community services will suffer, while taxes will inevitably increase in a state that consistently ranks as one of the poorest in the country.

“Many people who work in the industry are Hispanic,” added Waters, a Carlsbad native. “This hurts across the board. It’s literally kicking a state that’s already down while they’re down.”..