Watch this 3:44 video. It appears to be a camp for a group of Antifa. The fellow narrating the video explains the location of the camp and how close and convenient it is to downtown Portland. A city that is coming up on a hundred days of rioting.

What’s interesting is the area the camp is located. It appears to be two large vacant lots in an industrial area minutes away from downtown. The narrator suggests its city property. The owners of the bar located across from the camp may be leasing that space for parking for their patrons and leasing it out or the city is donating or leasing the space to Antifa directly. Either way, it doesn’t look good for the Mayor, City Council and for that matter, the Portland Police Department if an Antifa camp is in fact on city property.

For heavenssake they are living right under their proverbial nose.

It’s interesting to see their set-up. They have a row of porta johns, heat lamps throughout, four, maybe five long creme-colored tents that may be a mess hall, showers, food storage, hell, who knows, maybe a social area. None of the individuals seen in the video are wearing masks, at least not like they do as the roaming provocateurs and agitator minstrels they are. It also looks like they have a couple of generators via the trailors on either side of the camp.

and this one is a closer view of the parking area now being used as the Antifa camp: 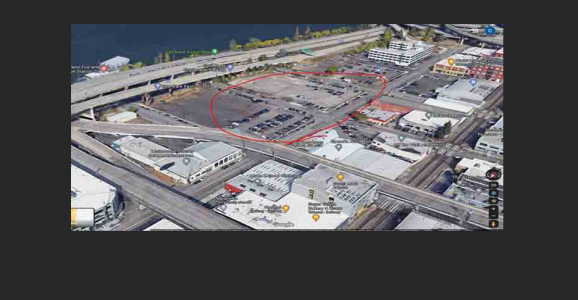 This video has been up since August 31st so I can only assume it will stay up. Hopefully folks have already mirrored the vid onto other video platforms that don’t censor. As well, the video is very instructive to future riots. If you see camps being set up in vacant parking lots that once had no fencing but now has a canvas up that blocks your view, well, it may very well be a traveling band of provocateurs and agitators coming to a Democratic stronghold near you.

One last observation, when you look at the camp at least from afar it looks orderly and clean. The fellow that took the video mentions the sight of lots of needles laying around. To be in this line of work one likely needs to numb themselves out, a lot.