The T-Room will be updating election issues found throughout the U.S. until polls close tonight…

The Champaign County Clerk's Office is reporting that computer server performance is being impacted by cyber-attacks on the network and servers, causing some delays at polling locations.https://t.co/zMd0Q67o4o

Heads up Georgia voters. This post is for you –

Okay y’all, we ALL are either, ourselves, poll watching today or know someone that is. This needs to go out to EVERYONE you know that is either poll watching OR VOTING!

The law in Georgia requires a Superior Court Judge to be on duty until 10:00 pm tonight, or later if needed. This judge is to make decisions, on the spot, for any irregularities or unlawful election or voting activity.

Therefore, EVERYONE needs to notify the judge on duty of the QR code being on their ballot illegally, even if you voted early, as well as any other violations of the election law . The appropriate Georgia codes with explanation is attached to this CTA.

—> First, everyone needs to call their Clerk of Superior Court and find out which judge is assigned and where they will be after hours.

—> Second, call the judge assigned, or better yet, write a statement and bring it to them, and inform them your ballot was unlawful due to the QR code. This will make this election illegitimate.

—> Third, poll watchers that are working the closing shift today – IF THE POLL SUPERINTENDENT DOES NOT COUNT THE ORIGINAL CAST BALLOTS WITHIN THE TABULATORS, IN VIEW OF THE PUBLIC, THIS IS A VIOLATION OF GEORGIA LAW. (see below) This violation will need to be in writing and brought to the superior court judge on duty.

The complaint will need to read as follows:

COMES NOW, the undersigned complainant, and seeks relief from this Honorable Court

Jurisdiction and Venue are proper in this Court pursuant to O.C.G.A 21-2-412, for the purpose of securing a free, fair and correct computation and canvass of votes cast at such primary or election. During such period the court shall issue process, if necessary, to enforce and secure compliance with the primary or election laws and shall decide such other matters as may be necessary to carry out the intent of this chapter.

As a (voter or poll watcher), at (polling location) I witnessed the following violations of law (list the appropriate Georgia codes and give a short explanation. I.e., QR Code appeared on my ballot, poll superintendent did not count the ballots in view of the public at the closing of the polls, etc.)

Therefore, I am requesting this Honorable Court to immediately intervene to secure the legitimacy of this election.

~ ~ ~ ~
—> Fourth, TAKE A PICTURE OF YOUR BALLOT. This is NOT illegal. There is a standing Federal injunction against enforcement of the Photography Rule. The case is (Coalition for Good Governance v. Kemp, 558 F. Supp. 3d 1370, 1393 (2021). It reads, “State Defendants are hereby enjoined from enforcing photography rule until further order of the court.” The court has NOT rescinded this order.

🚨 It is of utmost importance to file these complaints with the Superior Court Judge today!🚨

Will do. I poll watched first two shifts this morning. Machine hiccups right out the gate, partly due to operator error. Half a dozen directed to provisional ballots. At 6:35 the ballot scanner count was 36 versus poll book 35. 8am scanner up 2. Chief said it was because she’d taken 2 provisional votes. Doesn’t jive because the two provisional votes she referred to came in after 6:35. Scanner jammed several times while I was there. We had quite a few voters whose precincts had changed, they were redirected. One notable was a woman and child. She was redirected to Randolph elementary school but she said her husband tried to vote there earlier today and he was told his precinct was Manakin. Election officer didn’t check her address, she just sent her to Randolph. Another anomaly happened when an Asian American checked in on one pollbook while another voter was checking in on the other pollbook, as soon as the EO hit OK on the Asian American voter, her system glitched and went off for a second before reloading. Other machine processed their voter with no glitch. 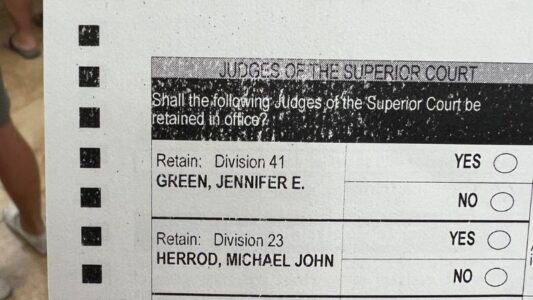 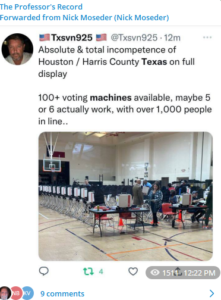 https://t.me/theprofessorsrecord/9497 – Voters in Detroit, Michigan are showing up to the polls being told they’ve already voted absentee when they arrive

Clerks are very aware that Republicans are waiting until election day to vote. Printing “errors” would have the effect of potentially forcing Republican voters to give up voting and go home.

20% of the Machine tabulators in hot red Maricopa County are down as of 12:10 pm EST. Follow the below guidance by RNC attorney to make sure your ballot is counted:

Guidance for Maricopa County Voters at Locations with Tabulator Problems – 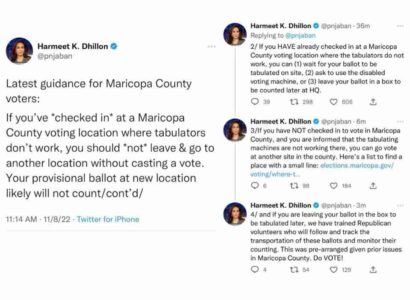